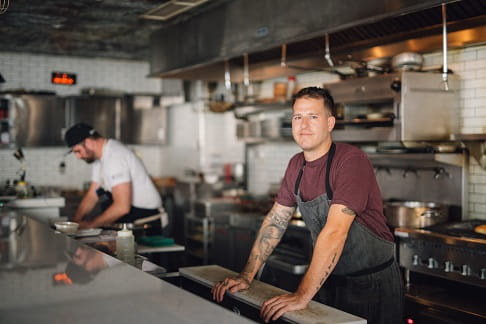 Having learned from his mother how to cook from scratch at a young age, it’s no wonder Chef Harrison Hennick boasts an atmosphere that feels more family and less business, all located in the heart of Hamilton at Nique Restaurant.

We recently spoke to Chef Hennick about his inspiration leading to Nique Restaurant and the process for building his vision outside of the GTA.

What inspired you to open this restaurant concept in Hamilton? Please provide some details about your operation.

The biggest thing for me was that I had been working in a restaurant beforehand that was very poorly managed and owned. The ownership took no pride or passion in the operation and this was very evident. I was trying my hardest to make things work and we got things on track and that was noted in a review from Chris Nuttlesmith after my being there for two months. I then decided that if I was going to work that hard for someone that didn't really care for his business, I should just do it for myself. It was at that point that I started making moves to put together a business plan and actually make things happen.

The concept for the Nique had been around since forever; my intentions, having had a bit of a business background, were always not to work for somebody else for the rest of my life and to open my own restaurant.

Share with us where you find inspiration for the flavours you incorporate into your dishes and your process for how to achieve them.

Travel is probably the biggest thing, and a bit of my work history. The way that I think about flavours or at least the process, and how I get into flavouring my food, is internationally inspired. Travelling places and eating different types of cuisines, local or abroad, have changed my perspective. Growing up, I was a white Jewish kid from North Toronto. I never really ate anything exotic until I was fifteen and, from there, my palate and mind for flavour expanded and I started trying newer things.

Cooking for as long as I have been, I can think up the flavours and don't really need to taste things first, put it to paper and start making things happen. I'm always looking for complementary flavours on a plate and then trying to find a way that I can introduce something that's not necessarily in the norm to make it kind of cool and/or go with tradition because some dishes are not meant to be broken, but some things are.

Describe the role flavouring agents like spices, herbs and seasonings play in your cuisine to achieve that craveable flavour that your guests are after.

Huge role. You can take ingredients that have a lot of flavours but there is so much you can do with herbs, spices and seasonings to either manipulate or enhance the final product. There are a lot of things I appreciate about natural cooking and letting produce speak for what it is but there's so much more you can do that is local and isn't going to be overpowering. You can make it complementary and make it work.

How would you define the Hamilton food scene and how do you think it will evolve in the next five years?

It's developing. It's currently in a very early infant stage, something we found out the hard way. We came into this market serving food and having the restaurant we wanted to have without recognizing what the market wanted. We opened with dishes I don't consider too out there (ex. Beef Cheek and Tongue) but they were interesting with more of an upscale approach. I don't consider it upscale but that's how it was perceived.

When we were new we had a lot of hype behind the opening. We were busy, and since then we've always been busy. But, we realized quickly that if we wanted to fill 85 seats once, twice or three times every night seven days per week, we'd have to simplify our approach to food and that was all dictated by the market.

It's going to take time, we're in it for the long run, and I always say that there's about 10%-15% of the people that are in the city right now who understand what we wanted to do with our menu, and why our beer menu is one hundred percent Ontario craft-driven.  But we still have a lot of people coming in and asking for the Canadians or the Heinekens and they can't understand why they're paying $16 for a burger and fries.

What role do you hope to play in the evolution of the Hamilton food scene?

I've been referred to as a leader in the community and I find that weird to say. What I want to be able to do for the Hamilton food scene is create a situation where people feel open to experimentation.

There have been some cool restaurants that have done things and, oftentimes, people classify it as "awful" when it should be considered "experimental.” I hope that people can put themselves out there, take a chance, take a risk, open a restaurant that's not, for example, taco-based or some kind of trend-based concept. Do you and be proud of it.

I think Hamilton is a place where people -can- do things like that because it's like the Wild West, anything goes and it either works or it doesn't.

Which new flavours and ingredients can we expect to see making their way to the centre-of-the-plate in the near future?

I just settled on a menu that's going to be rolling for a while but I'm constantly trying to do new things. This kind of question comes at a rough time because I'm in such a transitional period with opening two new restaurants and we're just riding this wave and not trying to experiment too much with anything new yet.