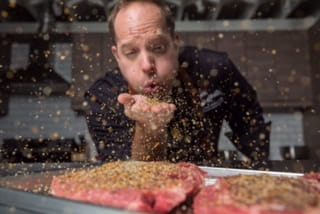 Time flies in our fast-paced lives. It feels like McCormick released its 2017 Flavour Forecast only yesterday, and already our world-wide team of Culinary and Marketing experts finds itself back at work researching the trends and experiencing the flavours destined to shape 2018 and beyond.

Every now and again, it pays off to pause and soak in the whole picture. Here’s a case in point. Last month, our team of trend trackers, innovation specialists, culinary professionals, and chefs gathered in London, England to take an in-depth look at what’s up and coming in the world of flavour. This global summit is a crucial step in our year-long investigation dedicated to identifying emerging flavour trends.

London is rich in history and culture, and it remains one of my favourite European destinations. It’s also a “foodie” city, and hence the ideal place to host McCormick’s Global Flavour Forecast Summit. During our week-long conference, international participants tasted and trekked their way through a multitude of markets, restaurants, shops, food stalls, and “street feasts.” These hands-on food safaris helped the global team gain valuable insights into the flavours and ingredients coming our way.

Here are four of the most interesting places the McCormick global team visited:

Borough Market
Borough Market is situated in central London, near the London Bridge tube station, and is London’s oldest food market. The Shard, London’s tallest structure, towers over its precincts to create a fascinating juxtaposition of the old and the new.

Borough Market bustles with stalls, shops, and restaurants that reflect London’s status as a truly global city. As you wander amid the sounds and smells, you come upon specialty cheese-mongers, meat purveyors selling zebra and kangaroo fillets, traditional English pub style fish & chips, and authentic Ethiopian dishes served from a giant pan. Borough Market proved to be a true culinary adventure, and the foods and flavours we tasted there were an essential part of our journey of discovery.

Brick Lane
Brick Lane is known as the “Curry Capital” of the U.K. During the late twentieth century, immigrants from Bangladesh began to move into this area of East London. As the Bengali population grew, so too did the number of East Asian restaurants and market stalls around Brick Lane.

Brick Lane is now a vibrant community and popular with London’s hip crowd. During the Flavour Forecast Summit, we visited several curry houses on Brick Lane and quickly learned that long lines guaranteed good eats. “Cinnamon” is known as one of the most legendary Indian restaurants on Brick Lane. Once we were finally seated, we discovered that it lives up to its reputation. The food was tasty, authentic and well prepared. My favourite dish at Cinnamon was the Fish Mohanna, a house specialty made with a sweet fresh water Bengali fish, King prawns, aromatic herbs, and a spicy curry sauce. Delicious!

Harrods Food Hall
We travelled from Brick Lane in London’s east end to the posh Knightsbridge in the west. Destination: Harrods Food Hall. Harrods is a luxury department store filled with designer clothes and high-end homewares. It is a “must-see” venue for anyone interested in checking out the high life in London.

Harrods Food Hall occupies an entire floor of the store. It has vaulted ceilings and marble floors. What truly impressed me about Harrods Food Hall is the exquisite presentation of the foodstuffs. Everything is beautifully arranged, visually stunning, and a feast for the eyes. The Rotisserie at Harrods, in the Meat Hall, is perhaps the most gourmet – and expensive – example of a traditional supermarket HMR I have ever seen. The rotisserie half duck, marinated in orange juice, fresh thyme and honey, was sublime. When visiting Harrods Food Hall be sure to bring extra cash!

Dinerama
What do trendy twenty-somethings do on a Thursday night in London? They head to “Dinerama” on Shoreditch High Street. This hipster haven is an indoor-outdoor venue with nine street food traders and eight bars. The McCormick Flavour Forecast team, made up of members from all age groups, descended on Dinerama for a true Millennial experience.

It was a night to remember. The food and drinks are offered at affordable prices and you pay as you go. You mix and mingle, try new foods, and drink new drinks, all to the beat of retro nineties tunes. “Prawnography” features giant XL black tiger prawns in a delectable Szechwan butter sauce. “Duck ‘n’ Roll” has a crispy mini duck burger topped with crispy balsamic onions and spicy tomato. One of the most memorable dishes I had during my entire stay in London was at “Farang”. Their sweet and spicy Khao Soi noodles in a coconut-curry sauce was street food at its best, and a fantastic way to end a fun evening at Dinerama.

McCormick will launch their highly anticipated 2018 Flavour Forecast report in December of 2017. In the meantime, you will have an opportunity to experience our 2017 report first hand during this year’s LHSC Tastings event on May the 4th at the Hunt Club in London or online at helloflavour.ca.