Skip to main content
Blurring the Lines Between Chef & Maestro 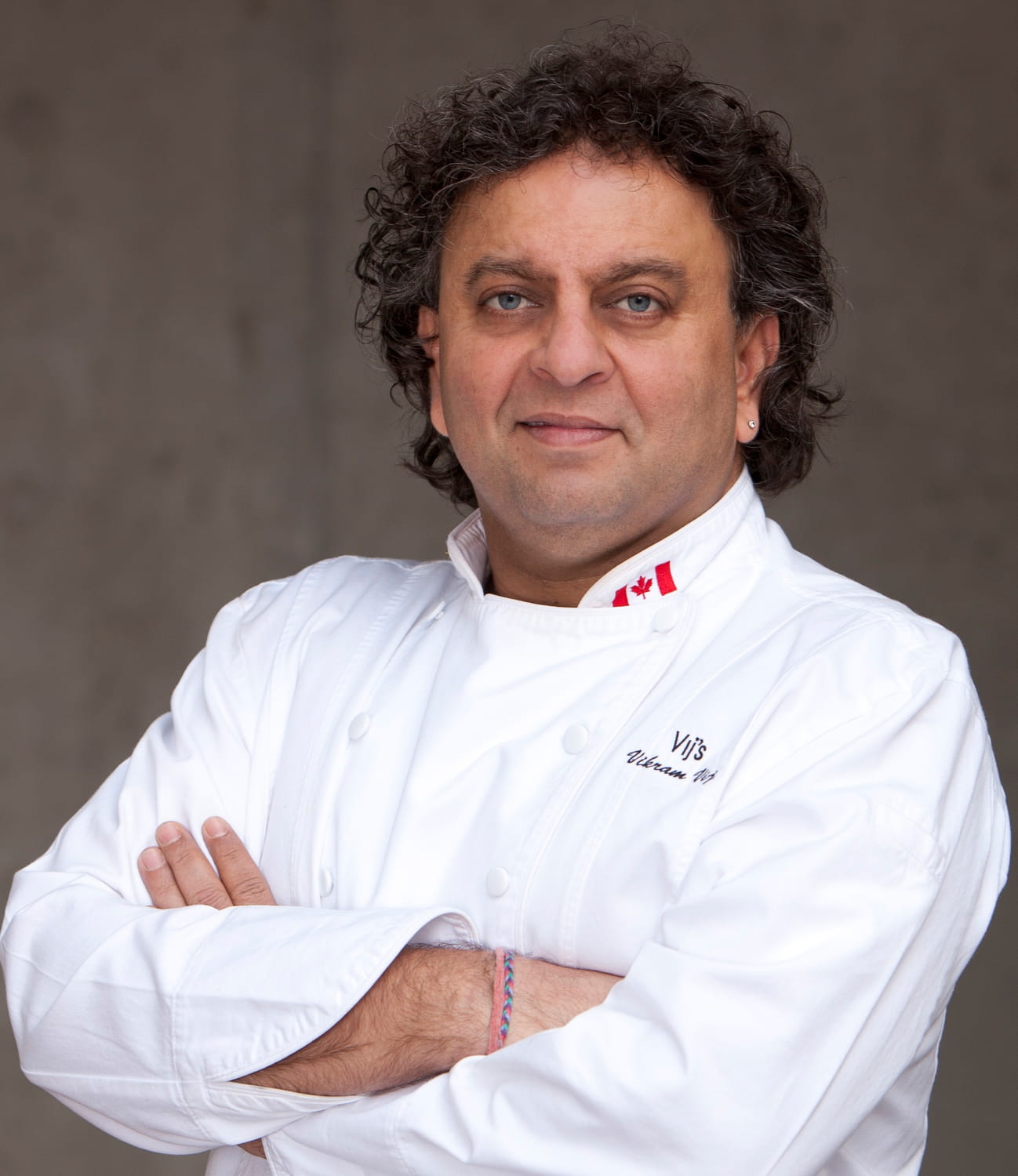 Blurring the Lines Between Chef & Maestro

Award-winning chef, restauranteur, author, television personality and former CBC’s Dragon Den dragon; Vikram Vij was born in India but came to work and live in the culinary world of Canada starting in 1984.

In 2007, Vij and his wife Meeru Dhalwala released “Vij’s: Elegant and Inspired Indian Cuisine,” their first cookbook inspired by the recipes cooked in the kitchens of their renowned restaurant Vij’s. The book went on to win the Cuisine Canada Gold Award for Cookbook of the Year and Cordon D’Or Gold Ribbon for International Cookbook. They later released “Vij’s at Home: Relax, Honey,” a family-orientated book of homemade Indian cuisine and in 2016, “Vij’s Indian” was released – the continuing and developing story of their lives and their recipes.

We spoke to Vikram to get a personal perspective on his international journey into culinary stardom and how he puts being a chef before being a celebrity.

What do you recall as your earliest inspirations toward wanting to become a chef?

When I was about 7 years old, there was this hill station in India and late one night, this man had coal burning on the road-side. He was roasting corn and asked me if I wanted to buy some. While finishing the corn, he took out a lemon wedge for it while also adding pepper, salt and chili. The corn was so hot coming off the coal that I eventually burnt the roof of my mouth but I distinctly remember just eating this hot corn while staring at the snow-covered mountains ahead. I thought, food is incredible, so delicious and tasty, while also thinking the cold air from the mountain would help the burning from my lips (it didn’t).

Although I had originally wanted to be a Bollywood actor, I loved food and everything about it so I left home at 19 to learn to become a chef in Austria.

What were some of your biggest challenges as a chef in your growing years?

Learning in Austria was tough because I didn’t speak German and that was the language of the school. Everything was so different; I’d be eating pork for lunch and dinner after eating mostly vegetarian while living back home in India. I threw myself into the cultural pool, only surrounding myself with people who didn’t speak my language in order to learn theirs.

What is a culinary philosophy worth sharing with those growing to become chefs?

In 1996, I had the opportunity to meet Chef Thomas Keller and I told him that his dinner was flawless, from the texture to the taste, while mentioning I was a young chef coming along. It didn’t leave an impression on him and he didn’t say a word. Fast-forward 24 years, I was given the opportunity to cook a main course for him and he told me how delicious it was. This was such an amazing turnaround; I had tears in my eyes. I was so touched, nervous and humbled by it.

Through inspirations and challenges, you’ve become recognized as a celebrity chef on an international level. How often does this status require you to step out of your kitchen and into the spotlight?

I’m still very much in the kitchen. I cook every dish I put together while bringing along my own spices — all while never bringing on an assistant. Day to day, I might not need to do all the cutting and chopping required but I don’t like the label of celebrity chef. I went to school to become a chef, therefore I’m happy just being called a chef. In my home country, it’s important to be equal, I don’t want to be seen as better than someone else, we’re all equal.

How has your role in your restaurants’ menu development and ingredient selection changed since reaching the heights you have?

When I develop a menu or choose an ingredient, I still do it the same way; I make it or pick it because I feel it’s what is right at the time. I’m making food from the best heart, soul and spices that I have, like a musician who just wants to give the most entertaining performance of his life. If it gets you high status, great, but that’s not why we do it. I just want to entertain through food.

In the restaurants, we do things differently than others. We taste and taste and keep tasting, making mistakes and seeing what happens. If you’re not having creative days, you’re not letting the chefs show who they really are.

While Meeru is Creative Director and Executive Chef coming up with dishes for Vij, we do talk and work creatively together but My Shanti is my baby. I come up with majority of the dishes and methods there.

Noting the diversity of Indian flavours, are there any trends we should be looking out for in 2017 that you may be incorporating into your menus?

One of the things breaking out in 2017 is cuisine categorized or inspired by regions, not just countries. Because people travel by region, they might want food specifically from Southern India or Eastern India, not just generalized Indian food.

Think of it like someone wanting mussels from Prince Edward Island or crab from the West Coast, not just Canada-wide offerings. Being travellers, people know the difference between locations where their food comes from and exactly what they like.

Through my new partnership with Air Canada, I wanted to create amazing dishes for travellers and made this delicious naan in the form of a tear drop, for those with tears in their eyes over being so happy to go to India. The people didn’t understand this at all, it wasn’t familiar to them. Even with the combination of lentils and ginger beans, these were things people simply did not enjoy so I had to fine tune my food toward the specific region of India that they were actually familiar with. Sometimes you have it, sometimes you don’t and that’s okay.

When you started out with your first restaurant, Vij’s, you mixed regional spices from India in unpredictable ways. How can an established producer of spices and seasonings such as, Club House help to bring Indian flavours to more restaurant tables in Canada?

Rather than just saying Indian flavour(s), say spices that originate from India. The notes are the same but the music is created differently by each and every chef. I say create what you are, who you are, what tastes and flavours you like, and do it without boundaries. Don’t limit the labels to being just Indian, don’t categorize it. Cuisine doesn’t have boundaries; chefs create them instead.