From Busboy to Pizza Man 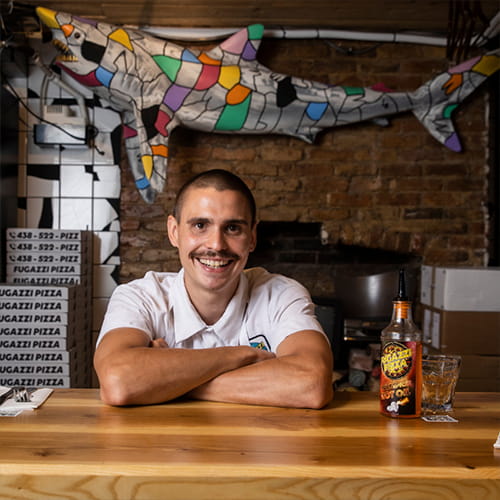 Antoine Morneau started out bussing at Europea a place with a style he calls a “gastronomic parkour”. One day, the chef invited him to work in the kitchen which is where his journey in the kitchen began. After cooking there for about three years, Morneau moved his talents to Au Pied de Cochon.

At Au Pied de Cochon, Morneau was among many seasoned chefs and was able to learn from their skills over the course of five years. During this time, Morneau was also selling tuna to various restaurants in Montreal. Selling tuna led him to his current position at Fugazzi Pizza where he leads the kitchen and everchanging menu.

We headed inside Fugazzi Pizza to learn more about Morneau’s tips for making a Montreal pizza.

How did your early experiences prepare you for Fugazzi?

My first job in that kitchen was at Europea. That experience taught me the importance of finishing and presenting a final product for the customer. I then went to Au Pied de Cochon for five years where we sold tuna to a lot of restaurants in Montreal. Jeremie, one of the Fugazzi owners who bought from me, learned about my background; one thing led to another, and here we are.

It's still developing. Ten years ago, there was “Pizza Hut,” “Pizza Pizza” and other very commercial pizzas. Little Italy was starting to do more [independent] pizzas and was a hit with Montrealers. Fugazzi pizza fits into that more artisanal scene.

To that point, how does Fugazzi vegan artisanal pizza differ from the many others found in the city of Montreal?

It’s the attention we pay to every part of the pie. We worked on our dough recipe for almost a year, and our sauce for longer. We only use ingredients from Quebec for the dough, sauce and toppings.

What influences your pizza selections?

Are there any signature flavours on your menu?

We do a lot of sweet and sour. One example is adding honey to the spicy sauce. We like this because it pops in the mouth with Fugazzi intensity.

Do you have a hero pie?

The Margherita. For sure. It’s a classic Italian pizza from the red, green and white flag. We sell it for $8.50 and do a lot of them for takeout.

How did Frank's RedHot® and Smoky Cedar Seasoning inspire your cuisine today?

I use Frank's RedHot Sauce with beef for the sear flavour of the Club House seasoning, which works great. It adds a nice spice to tomato sauce, which, for me, is a go-to.

Is there anything that you think would be helpful for other chefs to know when using those two products in their kitchens?

Don't be scared to use them everywhere. If you like something spicy, Frank's RedHot is perfect. Plus, the Club House spices go with pretty much everything: chicken, fish and beef, for sure.

What do you hope to serve next?

I would like to do a parmesan wheel in front of the clients, like a nice cognac flambe with homemade Kraft dinner and truffle on top.

Before you go, we need you to settle a debate. Does pineapple belong on pizza?

For sure it does!

So, what doesn't belong? What would you never put on a pizza?