Skip to main content
Inside the Smokehouse of a Pit Master 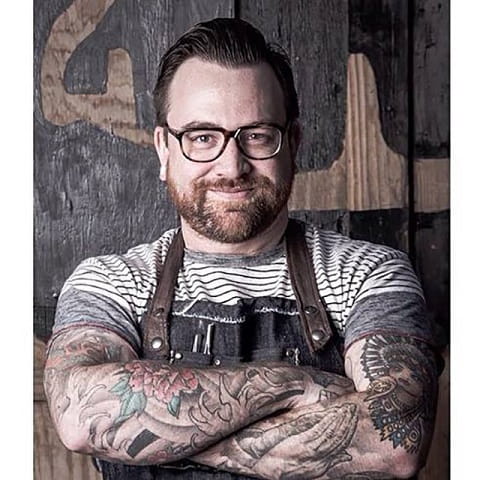 Inside the Smokehouse of a Pit Master

Adding a little smoke to the fiery culinary scene of Portland, Oregon, Kim Jong Smokehouse, Smokehouse Tavern and Smokehouse Provisions’ Executive Chef BJ Smith has spent most of his life harnessing the craft of flavour development in fine dining.

We recently chatted with Chef Smith about his optimal cut processes as well as how other chefs can beef up their own meaty tastes in the kitchen.

As a pit master, you’re in charge of maximizing flavour with each cut of meat. Explain which cuts yield the best flavour and why.

What drives flavour to specific cuts of meats are the areas where the majority of blood pumps through. Those tend to be the tougher cuts as well because the muscles are stronger, having been used more, which helps develop more flavour. These are the cuts that are good for smoking or cooking over a longer period of time because you're developing even more flavour while breaking down the toughness of the meat.

Pork cheeks, for example, are really great smoked, same with beef cheeks, briskets and hams. That whole area of the animal is good for BBQ because it's high in fat which melts over time, making the meat super delicious.

What are the key elements a chef should be aware of and looking for when sourcing different meats?

Fat content is one of the most important elements. You don't want to take a lean piece of meat, like a loin or tenderloin, and cook it for a very long time. It won't make great BBQ because there's no fat. It becomes what feels like sawdust.

You should also know which cuts are better to cook for longer or shorter periods of time. With beef tenderloin, it's going to be really great and tender to eat if you just throw it on a grill and cook it to medium rare. For something that's good, even when raw, you could have a beef tartar which is softer. Meanwhile, a brisket would make for a horribly tough steak so you'd want to cook it for a very long time and let the proteins break down.

Each of your meat-centric dishes are prepared on the smoker. Share with us your reasoning and any techniques you use before throwing the meat in the smoker.

It was really important to me when opening this brand that I didn't call it BBQ. I wanted to call it a smokehouse because the menu’s focused on smoked meats, not just BBQ. To me, they're two completely different things. When smoking meats, you're able to take cuts that aren't used as much and elevate them to something that's really delicious without being necessarily high-brow.

When it comes to technique, it all depends on which animal we're preparing. For example, we’d cure a fish for 24 hours but we’d brine a chicken, adding salt to maintain the moisture in the cooking process. With our pork or beef, we’d rub it before it goes in the smoker because it's going to be in there for so long, having ample time for the flavour to penetrate the meat.

Traditionally you keep your meats “dry” when served. Which ingredients and techniques do you use to infuse flavour into your rubs and smokes?

The most important ingredient we use is salt, especially with beef. Salt is the key ingredient with our curing process and we add a little sugar to that, same with the brining process. Ultimately, this is because we have to find the best way to regulate the salt content in our dishes.

When using brines and cures in your flavour process, how do you ensure a balance of these flavours?

Generally, when you're curing or going with a brine, we recommend a 1:1 sugar to salt ratio if you're going to leave it overnight. This doesn't make the meat not sweet, it just makes it taste a little less salty. While we use white sugar with most meats, we tend to use brown sugar with our pork because it's a little sweeter and it caramelizes the flavour.

Meat is at the helm of your menu, where do you continue to draw flavour inspiration to create dishes using ingredients that are not typically offered at a smokehouse such as fish, fowl and lamb?

I started cooking in 95 and have been in fine dining my whole life. When I started doing BBQ in 2011, I brought my previous training and inspiration with me, applying it more in an every-day casual setting.

We have some meats that are always on the menu because we have farms which always have them available. However, we also offer lamb and fish which are both very seasonal offerings and whenever we get our hands on wild salmon, we use it right up.

Vegetables are also at the core of our menus. We work with many local farmers and like to have fun and play up our vegetable-centric dishes. For example, moving into fall, you’ll find an abundance of Brussels sprouts and root vegetables which we tend to change on a weekly basis depending what our farmers have available.

Your food has received many accolades for your classically trained background while fusing modern techniques, where do you plan to take the smokehouse-style approach next, specifically in terms of flavours and cooking techniques?

The cooking techniques are the foundation of what we do here and we probably won't expand too much on the actual techniques. Where we'll do a lot of playing is taking ingredients that aren't necessarily thought of as BBQ and making smoked meat dishes out of them. We're also going to start moving into doing more fowl like duck and quail as well as game meats such as elk, bear and wild boar for the fall season. Working with different cuts of meat, we’re able to implement ideas people aren't used to seeing which will be very fun for us.