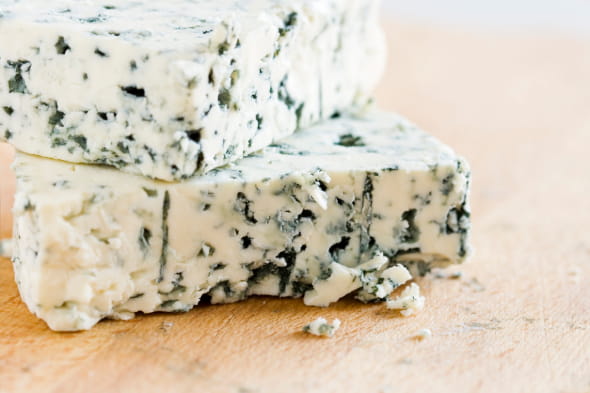 Of all the pizzas we have featured, perhaps few have captured the imagination of a certain section of diners as much as blue cheese pizzas.

This may come as little surprise. After all, there is something truly exceptional and delicious about melted blue cheese, although of course there are those who prefer their cheese without the blue bits - and pregnant ladies should avoid it.

No matter: There are many foods that some love and some won't touch. But for those who love a bit of blue cheese, this is a wonderful pizza.

The other ingredients should not be underestimated. Red peppers are always a superb pizza ingredient and julienned red bell peppers are the perfect ingredient, always a great accompaniment to cheese.

With chicken strips and buffalo wing sauce, chopped celery and garlic, there is also a mix of flavours that produces a magical combination with the blue cheese.

This recipe will have blue cheese sauce, as well as crumbled blue cheese - and the latter does offer some interesting possible variations.

For many, the best blue cheese option is an established type with which fromage fans will be very familiar. The likes of Gorgonzola from Italy, Stilton from England and Roquefort from France are some of the stars of the blue cheese world, and the last of these - or another French variety - may be particularly popular in Quebec. But it is worth considering a range of alternatives, not least Canadian blues.

This is a wonderful opportunity to showcase the best of Canadian cheeses, adding a little extra value for diners who may not even know they had such varieties on their doorstep. This will particularly be true when the cheese is from the local region, as it will be a great way for restaurants and diners alike to support local farmers and producers.

For decades Quebec has been dominant in Canadian cheesemaking, building on its strong Francophone traditions. But in recent years the region has had to share its fame a bit more. In 2013 Margaret Peters Morris from Ontario stunned the world when her aged Lankaaster was named the Supreme Global Champion at the Global Cheese Awards.

This was just the start, and in 2015 her Celtic Blue Reserve won best in show at the 2015 American Cheese Society Awards, beating off 1,778 other entries spread over 109 categories.

It was the first time in 30 years the best cheese had gone to a Canadian entrant. As the Globe and Mail put it: "A Canadian cheese taking top prize is like a foreign film winning Best Picture."

The Celtic blue comes in two varieties - a tangy and salty Original and a smoother, more creamy Reserve. Ms Morris said: "The Reserve is for people who are cautious with blue - it doesn't hang with sharpness, it's very delicate."

If the Celtic Blue is a great option that Ontarians will love, maybe Nova Scotians will say the same about Dragon’s Breath Blue, produced by That Dutchman’s Farm on the island and listed by Eat North as one of the top six cheeses in Canada. The publication described it not only as a "bucket list find", but also "a pretty good introduction to blue cheese for the uninitiated," the last of which may make it ideal for a pizza lover trying something new.

For more full-on lovers of blue cheese, Eat North listed the Tiger Blue from Penticton in British Columbia, describing it as "everything you’ve ever wanted if you love being smacked in the face by stinky-socks blue cheese.

"It’s intense, but for blue cheese fanatics, it’s exactly what you’re looking for."
These variations show how many options there are for the pizza chefs, but there are also some great red pepper options too.

For those keen on going organic, production has been increasing in recent months. For example, last May the British Columbia-based Oppenheimer Group reported impressive output growth. Its executive greenhouse category director Aaron Quon told The Packer: “Our Canadian organic pepper program, produced by Origin Organic Farms and packed in the popular OriginO label, is starting out well and will entail greater volume than last season."

This means those blue cheese buffalo pizzas can be something quite exceptional, combining great organic peppers and Canadian blue cheeses of various strengths. Chefs can truly raise the bar with the variety that is out there across the different provinces.