Skip to main content
Pushing the Boundaries of Traditional Ramen 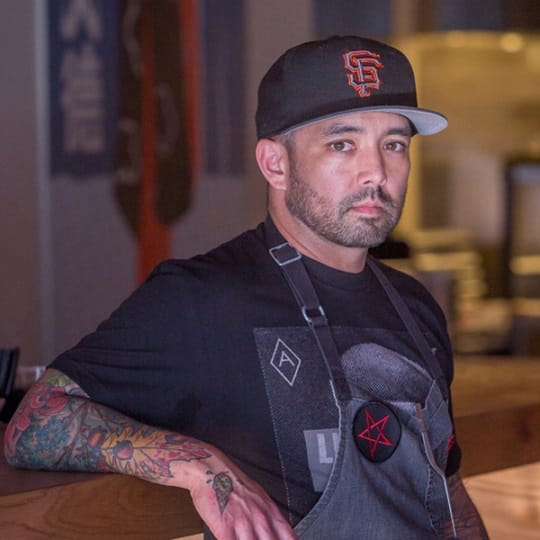 Pushing the Boundaries of Traditional Ramen

Chef Richie Nakano is the Chef Owner of Hapa Ramen in San Francisco.

Growing up in a Japanese-American family who loved sharing big meals triggered his interest in a food career. He worked as a waiter and bartender after high school and eventually enrolled in the California Culinary Academy.

Richie started his career cooking Asian food, first at Sushi Ran and then Va de Vi and Pres a Vi. Looking to expand his repertoire, he then joined the team at Nopa, where he learned about seasonality, California ingredients, and layering flavours. At the same time, Richie was eating a lot of ramen throughout San Francisco and wanted a bowl that met his standards—made with better ingredients and proper technique.

In 2010, he opened Hapa Ramen, a pop-up food stand at the Ferry Plaza Farmers Market. By teaming up with some of the best organic farmers and employing modern techniques, he pushed beyond the concept of what traditional ramen can be.

He then opened Hapa, his first brick-and-mortar ramen noodle restaurant, in fall 2014, focusing on non-traditional Japanese ramen, and ran it to critical acclaims until late March 2015.  Then in 2016 he founded IDK Concepts, a pop up collective and consulting firm.

We recently sat down with Chef Richie to explore how he is pushing the boundaries of traditional ramen through modern techniques and layering flavours.

You’ve been recognized for your ability to take traditional ramen and give it a non-traditional twist. Define your take on this classic dish.

My approach with ramen is to take traditional methods and combine them with modern cookery, seasonal ingredients, and more than anything, not letting myself be confined to people’s expectations. Ramen is a young food, it is less than 100 years old so really it is only in the infancy stage. It needs chefs pushing its boundaries for it to grow and reach its full potential.

Share with us how you’re pushing beyond the concept of what traditional ramen can be through utilizing modern techniques. Provide examples.

In a lot of ways technology provides solutions. Sous vide is great for making a very consistent chashu. Eggs slow cooked in a circulator are great in ramen. But moving beyond that, breaking down recipes from the ground up and finding new ways to layer flavours in is something a lot of ramen chefs aren’t doing. When you make ramen noodles, the hydrating component is water, versus eggs in Italian pasta. Something that’s interesting to do is using flavoured brines in the noodles. As long as the brine you add to your dough doesn’t knock the pH out of whack, it’s a great way to add flavour.

Describe the non-traditional ingredients, spices and seasonings you’re incorporating into your dishes as a means to layer flavours.

Smoke is an underrated ingredient in ramen. Smoked bones and flours are great for making noodles. Also, acid isn’t often used. Incorporating acid through making fresh citrus juice into gels can be a way of delicately introducing bright notes.

Explain your signature ramen dish and why?

My signature ramen is a blend of several traditional styles. I use tonkotsu – a creamy, super rich ramen stock – which is then seasoned with tare. Using tare adds that hint of shoyu. Then I finish it with a lot of salt and black pepper, which makes it part shio. I also like to incorporate a variety of different proteins and vegetables such as, fried chicken, chashu, and nori. Overall, it’s a mix of tradition, through the lens of blending styles and techniques.

What can we expect making its way to the center-of-the-bowl next?

The next five years are going to be really interesting in the ramen world. I think we’ll see a lot of new styles of broths, lighter dishes and flavoured noodles. Ramen was very tonkotsu crazy recently, so it’s been cool to see things moving towards being lighter and more of a personal expression of each chef, rather than strictly trying to adhere to tradition.