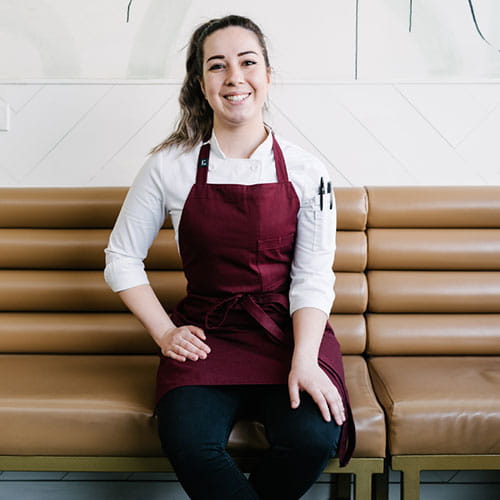 Launching herself into the foodservice industry at the age of 18, Samantha Medeiros doubled as a culinary student and front-of-house employee at Toronto’s Mercatto restaurant while also building staging experience at Richmond Station, a nearby establishment run by Top Chef winner Carl Heinrich. After moving to Richmond Station full time, Chef Medeiros spent a summer break working in France before coming back to become Richmond’s Saucier. Eventually, she moved to Hong Kong for 12 months to gain culinary experience in multiple cuisines under a food group that had owned 17 restaurants, including ones focused on quick-fire Vietnamese, Italian and Indian Punjabi.

Following three months of leisurely travel of the culinary scenes within Europe and Asia, Chef Medeiros returned to Toronto once more and joined La Palma where she currently resides as Sous Chef.

We caught up with Chef Medeiros to find out how La Palma has stayed innovative among their merged menus and kitchens while also taking their offerings beyond traditional takeout.

How would you describe the atmosphere and dining experience of La Palma?

When I first started working here, we only had one floor that grew very quickly into two floors. Upstairs has become more of an event space, or where you can start your visit with a drink. However, the menu is offered on both floors. We were open for lunch and dinner every day, brunch on the weekend and late night on Fridays and Saturdays.

This past year, we shifted to mainly dinners. We're also not open seven days a week anymore, we're only open five. Menu offerings have been reduced and some of the remaining menu items have been changed to make them better for takeout. A lot of perishable items have gone off the menu, like fish or seafood, because they don't last as long or keep as well. Certain appetizers like the charcuterie and cheeses have also been taken off because they were originally there for you to be able to snack at the table and aren't our focus enough to be a takeout option.

Were there any ingredients or cooking techniques that required major changes through the pivoting process?

Instead of having four kitchen sections — appetizers, pasta, grill and pizza — we've made appetizers and pizza into one section. For example, our chicken liver used to come with sourdough bread that we used to get from Blackbird. Now, we use our pizza dough in-house to make flatbread, keeping everything in-house.

Two sections in the kitchen focus on woodfire, with the woodfire pizza oven and woodfire grill. To keep those going all day, it takes a lot of wood so that's why we shifted to only serving dinner. The neighbourhood we're in is also a very dinner-focused space.

How did you find inspiration in your dish today using Lawry’s® Lemon Pepper Seasoning and Lawry’s® Cajun Seasoning? Anything that would be helpful for other chefs or operators to know about it?

We always have pasta on the menu, it's a staple at La Palma with it being an Italian-inspired restaurant. I thought, "what's a good way to incorporate two really strong but different spices into one dish?" Because the Lemon Pepper Seasoning is very bright and pungent in flavour, I paired it with a breadcrumb to help balance it out. Then I used the Cajun Seasoning in the steaming of the clams to give it a beautiful colour and to give all of the spices in different components of the dish a more well-rounded feel.

When I think about using the Lemon Pepper Seasoning, because it's so strong in flavour and quite acidic, I try to think of ways to pair it with fattier or more muted flavours. This showcases the product without it being overpowering in the dish.

With the Cajun Seasoning, because there are so many levels of flavour, I let it speak for itself by not overcomplicating the rest of the components in the dish.

Looking back to your operations, what was the drive and passion behind wanting to launch La Palma At Home? What have been the major sellers?

Because takeout has become oversaturated in the city, and everyone is doing it to the best of their abilities, it becomes hard to stand out in a crowd even if you have regulars. We started offering La Palma At Home, featuring a weekly three-course dinner for two for a set price. This includes an appetizer, a main and a dessert that is able to be picked up on Fridays and Saturdays, giving people something to look forward to or plan for at the end of their week. This also allows us to put dishes on the menu that we wouldn't be able to sustain for regular takeout but would be able to be a platform to showcase or highlight certain ingredients that we love throughout the seasons.

The most popular ones are when we start to do it for a holiday or special occasions, like Valentine's Day, Super Bowl or New Year's. We've extended it before to be more than three courses, sometimes when celebrating something specific.

Are there any other new ideas or offerings coming to La Palma in the near future?

Being central on Dundas, and having beautiful garage door windows, we've been planning to sell out the window, especially in the sunny weather when there's more foot traffic. This will also allow us to put special things on the menu as a fun way to showcase certain ingredients in a grab-and-go format. Some things we've done in the past are oyster shucking, burgers and ice cream sandwiches, to name a few.

It has been a very hard year for everyone and the restaurant industry has definitely taken a huge hit. As any chef knows, we are very good at thinking on our feet and the word of the year is pivoting. I think in due time, we will come out stronger than ever as long as we keep holding on and keep innovating while not giving up.

2021 Edition of Coast to Coast
Club House for Chefs uncovers the behind-the-line tactics and bounce back of chefs and operators across Canada as restaurants navigate not only reopenings but re-inspiration. Explore more