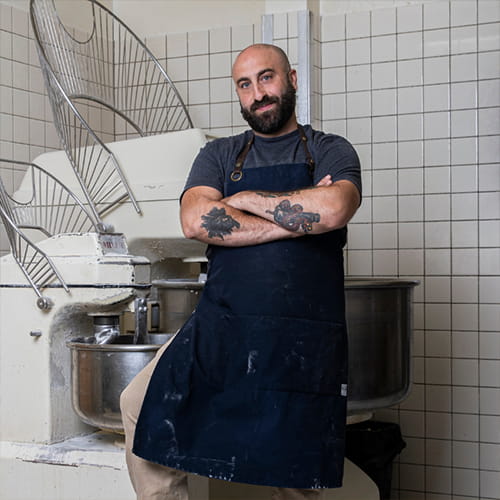 Having spent all his life living in Montreal, raised on Israeli cuisine and traditional tastes of both his Jewish family and their favourite local delis, for Dan Geltner, deli Hof Kelsten is like his second home.

An experienced chef, caterer and consultant whose Jewish-inspired cuisine has been tasted in Israel, France, St. Lucia and the Cayman Islands, to name a few, Dan is now bringing his expertise and personal background to the city-wide clientele of Montreal's French-Jewish must-stop.

We popped into Hof Kelsten to learn more about how Geltner elevates meats and breads beyond expectations, and where he’d like to take both the deli and bakery sides next.

Firstly, what’s the meaning behind the name Hof Kelsten?

Hof Kelsten is a fun-sounding nickname version of owner Jeff Finkelstein’s name. When he lived in Spain, they would call him Hof instead of Jeff because they couldn't pronounce it and mixed up his name Finkelstein with Kelsten. That became his nickname and he kept it.

At Hof Kelsten, you are renowned for serving bread and baked goods. You also do wholesale to some of the city's best restaurants. How has it been working with your restaurant partners coming out of the pandemic?

It's been very difficult. We lost a lot of clients but a lot of them have been hanging in there as well. We have amazing clients and have worked together to make things work.

We've changed the way we do things. One of the biggest things is we've put more focus on the wholesale programs to the restaurants as opposed to working on the retail front. That way, we're able to use less staff, less people that have to cross paths. We're selling more out the back door instead of selling out the front door. What was 50/50 before is probably 80/20 now.

How would you describe Hof Kelsten’s products in comparison to similar bakeries in your area? What sets you apart?

We're a French bakery with a Jewish twist. We like to use a lot of our bubbies' recipes. Plus, we’re the best (laughs).

What has been the hero dish at the deli that you know will resonate with customers and is easy to make, with your best margins?

I'd say there's two things from our deli side: our brisket sandwich and the smoked salmon that we smoke in-house. They're both staples that have been here for a long time and we could never take them off the menu.

As far as the bakery side, our rye bread is definitely something that we think stands apart from the other bakeries in the city. Our croissants are also one of the most popular items — every good coffee shop in the city has Hof Kelsten croissants.

Is there any local inspiration that goes into your baked goods? How about global flavours?

We try to buy almost all of our vegetables from a market, which is not far from here. I would say the majority of our ingredients are local and organic. You can't get better flavour than local. Internationally, it's more about ideas, like for our specials. We'll use spices, flavours and recipes that come from international styles and take things that we've learned from the international recipes but will use local ingredients.

Personally, I like to cook a lot of Israeli cuisine, that's what I grew up eating. With our Jewish cuisine, there are obviously lots of Eastern European influences.

In addition to the baked goods, you have a weekly menu that can consist of anything from soups to briskets to fish. How does Montreal's rich deli history inform these?

I was born and raised in Montreal, going to all of the best delis around the city.

I always say that I try to make things taste as much like the delis that I grew up eating from while trying to bring a lot of modern trends to the original flavours.

With the Steak Spice, I've tried putting it on delicious crackers. I've made croutons with it. Obviously because we have so much bread, flour and dough here, for us, it makes sense to try incorporating bread into our different recipes and dishes.

What’s next for Dan Geltner and for Hof Kelsten?

World domination! I mean, I'm very lucky to find myself in a place that has long-time loyal clientele, I get to do all kinds of specials and I get to bring my background to the food here. What's nice is that I've been playing around, trying new things and the old clients have loved trying them out. New clients are coming in for them as well. I get to cook and have fun.

Right now, what's been doing really well for us [collectively] is products. One of the things that's nice about products is you don't need as much staff because you can do a lot of one thing. We want to really build our brands, as far as our pickles, sauces, things like that. We'd like to expand one day, maybe sell our sauces to Club House and all the grocery stores. That's where we want to focus our energy: packaged goods.