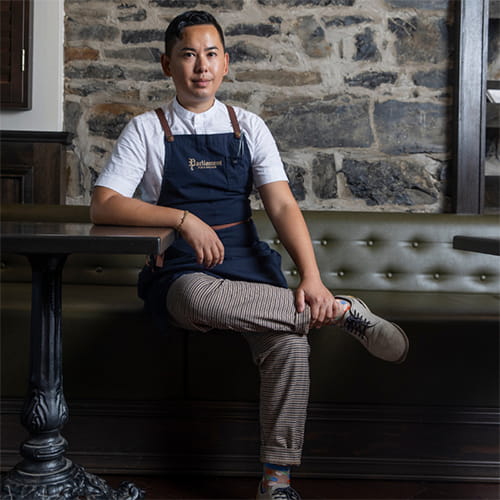 Raised in his Cambodian grandmother’s Windsor kitchen after his family fled the Civil War, it was only a matter of time before Chef Chanthy Yen took the culinary landscape of Canada, and the world, by storm with his passion for this underrated, underrepresented cuisine.

After working with world-renowned chefs including, but not limited to, Angus An, Magnus Nilsson and Andoni Luis Aduriz, Yen headed to Montreal where he worked as Executive Chef at British pub Parlement.

Once the pandemic caused Parlement’s temporary shutdown, Yen used the downtime and empty space as his opportunity to open Touk, a dream of a Cambodian pop-up and an overnight success.

We headed inside the doors of Parlement to learn more about Yen’s Cambodian cuisine and where he’s taking it next.

After working as the Executive Chef of Parlement here in Montreal, you opened Touk within the same building. What was it like for you to do a pop-up inspired by the cuisine of your home country?

It was both exciting and nerve-wracking. I got the green light for opening Touk on my birthday on May eighteenth and had five days to open up a brand new concept. I was afraid of not making it on time as any chef fears when opening something that's brand new. At the end of the day, it turned out to be a huge success, not just for myself or Touk but for Cambodian cuisine as a whole, which I was able to bring into the spotlight internationally.

What has been the hero Cambodian dish that you know will resonate with guests and is easy to make, with your best margins?

My favourite dish right now is the Nom Banh Chok, which has been featured in the most magazines and posts. It's something that my grandmother taught me how to make and is a dish I always love to make. It's simple; as soon as you have a Cambodian pantry, it makes life much easier. Starting from scratch, it is a little bit labour intensive.

Nom Banh Chok, to me, is the dish that resonates most with the crowd that comes here, even those trying for the first time.

How does the reception of your dishes differ between crowds who know Cambodian flavour and those who are new to experiencing the flavours?

Most Cambodian people here immigrated here from Cambodia as refugees during the Cold War so some people have not eaten these things or tasted these flavours for a very, very long time. For those who haven't eaten it in a long time, it's very heartfelt, almost dramatic. I've had guests who cried while eating it because they were torn away from their families and their environment.

For people trying it for the first time, it almost feels like a Michelin star experience because you are having the whole body sensational experience of eating Cambodian food, which is fragrant, fresh and new to the scene. It isn't well-represented throughout North America.

Are there any particular local flavours or techniques integrated into your dishes?

I've been cooking for sixteen years and local food is very important. We like to use local purveyors and farmers for tomatoes and halibut. (The seafood here is amazing.)

How did you find inspiration in your dish today using Club House® Garam Masala? Anything that would be helpful for other chefs or operators to know about it?

What I did first was taste it without anything else, then I tasted it again in oil. I was then able to bring out all of the nuances from the spices in something that's a bit creamier while using coconut milk instead of cream; I'm lactose intolerant. As much as I love dairy, I like to cook things that I like to eat. It's then lightly warmed with the leeks and cooled down with coconut milk.

To any chef who does want to try this out, use it in any techniques you can, whether an aioli or oil or creamy sauce.

What’s next for Chef Chanthy Yen? Any projects or further developments in the works?

There are so many projects on the go at the moment. I'm writing the very first Cambodian cookbook in Canada and that's hopefully going to be released in 2023. I'm also looking to bring Touk to a permanent home either here in Montreal or in Vancouver, British Columbia.

Do you look to any other Asian Canadian chefs for inspiration?

Sometimes I look to a chef named Angus An who specializes in modern Thai cuisine in Vancouver. He was one of my very first stages as a culinary student and that really opened my eyes to the potential in any sort of Asian cuisine.

Stay creative, stay curious and cook from the heart.