As the spice squad headed to British Columbia, it wasn’t enough to just visit beautiful Vancouver as there were so many additional top restaurants and gorgeous destinations to be found beyond its city borders. 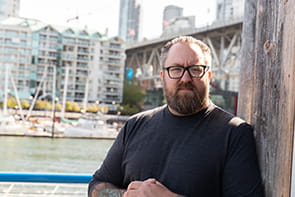 And who better to guide the crew around than top BC restaurateur Chef Robert Belcham? Dedicated to cooking in the community that raised and taught him, after graduating from the Culinary Arts program at Camosun College, Chef Belcham built on his skillset and kitchen experience at Rebar (Victoria). This was followed by a move to California to become Chef de Partie at the world-renowned California French restaurant, French Laundry; but he couldn’t stay away forever.

Chef Belcham soon returned to run C Restaurant, one of the most famous seafood restaurants in Canada at the time. In addition to his eventual position as a Chef Consultant position at Nu, it was time for Chef Belcham to dive head first into becoming an operator of his own future award-winning business, Fuel Restaurant - renamed Refuel Restaurant & Bar two years later. Since then, he has owned a line of successful restaurants also including Campagnolo Restaurant, Campagnolo Roma, Monarch Burger and his most recent, Popina Canteen. 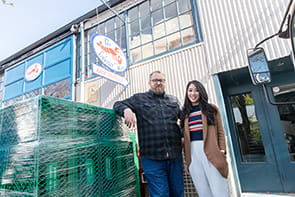 The team’s BC experience was kicked off with a visit to family-run The Lobster Man on Granville Island to learn all about shellfish from Business Development Manager, Chelsea Sang.

“So, what’s your favourite type of shellfish?” she asked Chef Belcham right off the bat. “It has to be Dungeness crab,” he immediately knew.

Selling high quality seafood to retail and wholesale in Vancouver since 1977, not only does The Lobster Man provide Chef Belcham’s Dungeness crab, they are also a go-to for clams, lobsters, mussels, prawns, salmon and oysters. “Some unique shellfish we get here as well are geoduck, BC sea urchin and BC spot prawn,” Chelsea added.

To ensure the freshest products for chefs and other customers, the team at The Lobster Man works with, and sources directly from, numerous local fishermen and fisherwomen to bring in new seafood daily while also offering delivery twice a day, seven days a week. Next, it was time to witness something glorious - Glorious Organics! Cooperatively operated by five former members of The Glorious Garnish and Seasonal Salad Company in Aldergrove, Glorious Organics offers local restaurants and farmer’s market shopper’s numerous quantities of fruits, vegetables, seeds, herbs and certified organic salad greens. Giving the crew a first-hand look at its operations was Mark and Susan. 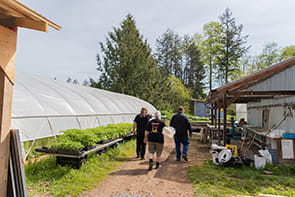 “Glorious Organics has the best salad mix that I’ve ever seen anywhere, anyplace, any country,” complimented Belcham. “So, of all these beds that are going right now, what’s going to be in my salad mix this week?” he then asked, pointing to the growing outdoor greens.

“It’s changing every week, as you know, and we send out a sheet to the restaurants/chefs,” replied Mark. “Right now, there’s sweet rocket, which go into a lot of our petal mix’s because they’re wild and edible. My colleague Michelle actually digs them up sometimes and moves them to make sure we have them in areas we can use all the time.” Also observed to be growing in large clusters at the time of the tour were swiss chard, arugula, tatsoi, mizuna and bull’s blood beets.

“Glorious Organics is also now a founding member of the BC Eco-Seed Cooperative,” added Susan. “We’re working with other farms in the province to develop and grow seeds in a variety of locations around the province so that we can build the resilience that we need to accommodate climate change.” 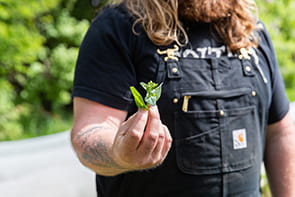 Speaking of farms, the team headed to Coghlan Cottage Farms next – a family-run Langley homestead owned by Jeff and Stacey Langford; “Raising good food you can feel good about.” “We have old spot varieties here that are excellent for bacon. One of the benefits of using heritage breeds is diversity, which can bring different things to the chefs in terms of fat content and flavour profiles,” explained Jeff Langford. “Plus, the nice thing about working with smaller farmers is that we’re more agile, nimbler and can give you the weights you want, the breeds that you’d like. We can get a lot more specific with the food product that you’re looking for.”

At Coghlan Cottage Farm, the pigs are raised in a 100% natural habitat as, according to the Langfords, the calm and lack of stress on the pigs means much less negative impact on the quality and flavour of the meat products processed and produced.

After a fun chase with the hogs, it was time for Chef Belcham and the Club House® crew to make one last stop together at Hopcott Meats. 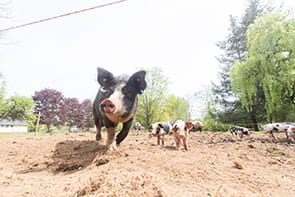 “My grandfather bought the farm and passed it on to my dad who then trained my brothers. Beef is definitely a passion and a love for my family. Quality and consistency in our product are our focus and that goes for the butcher shop as well,” explained Jenn Hopcott-Foxley, daughter of the Hopcott’s and current Operations Manager, as she guided the team through the cow pastures. 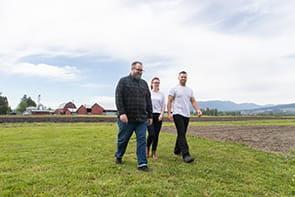 Upon arrival at the on-site butcher shop, Chef Belcham and the group got a first-hand demonstration in properly carving cow meat.

“You want to try to find someone with the most experience and who understands the anatomy of the animal, how things are broken down and how to get the best cut,” explained Mike Lindsay, General Manager and Head Butcher of Hopcott Meats. 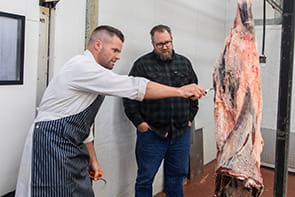 That’s why it’s best for chefs and foodservice operators to source their meats from local farmers and butchers, rather than mass-producing processing plants.

And as much as everyone would have loved to spend the rest of the day among the animals, it was time for Club House® and Chef Belcham to say goodbye as the flavour  team departed on to their restaurant run, ready to create brand new collaborative recipes with some local chefs!