Coast to Coast with Club House® for Chefs: Ottawa Edition

After last year’s amazing Coast to Coast Tour through Edmonton, Winnipeg, British Columbia, Halifax and Montreal, we couldn’t wait to get back out on the road and uncover more of the country’s amazing chefs, restaurants and #flavourgoals. This year’s stops include Prince Edward County, St. John’s, Saskatoon and Kelowna.

But first, a capital destination; the culinary community of Ottawa. We met with Chef David Godsoe, the Executive Chef behind 18-Hospitality Group to see what a day in the life of a restaurant group chef looks like.


“The 18-Hospitality Group consists of five restaurants: Jackson, The Clarendon Tavern, Social, Restaurant e18hteen and Side Door” Godsoe explained. “We're owned by Peter Boole and Caroline Gosselin and have been a staple in the Ottawa food scene for nearly 20 years.” Before 18-Hospitality Group, Chef Godsoe graduated from Algonquin College’s Culinary Management program. He then gained experience in fine dining establishments across Ottawa, including The Black Tomato, Broadway Bar and Grill, Indulge Kitchen and Cocktail, NeXT Restaurant and Ramada Ottawa on the Rideau.

“I joined the 18-Hospitality Group in 2016, starting with their flagship, Restaurant e18hteen,” Godsoe said. “After a successful first year, we branched out and opened The Clarendon Tavern in March 2018. Then, in January 2019, I took on Social to help revitalize the concept and strengthen their business. We’ve recently added Jackson to the portfolio of restaurants I’m overseeing with the group.” Chef Godsoe begins his day at Jackson – a restaurant and event venue located within the Ottawa Art Gallery. Jackson is the most complicated of the Godsoe-managed establishments because of involvement from the OAG and the City of Ottawa. 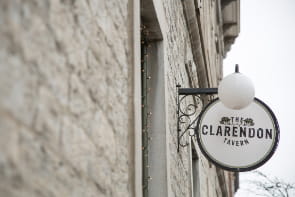 “Trying to navigate everything in a successful manner has been a challenge over the past few years,” said Godsoe. “Jackson is a very complex business. We do very large events which take place throughout the year so there is lots of ebb and flow action. On a day-to-day basis, we operate as a cafe as well as a lunch restaurant. We're currently building on our events and actively improving the cafe. The foundation is there, we just need to build on it all.”

Once he’s finished at Jackson, Chef Godsoe heads to The Clarendon Tavern to check in with managers there, inspect products and partake in tastings as needed. A lunch, brunch and dinner, Chef Godsoe’s original role was primarily in the initial set-up, the menu development and assembly of the team. Today, his role is mostly maintaining the system he created. 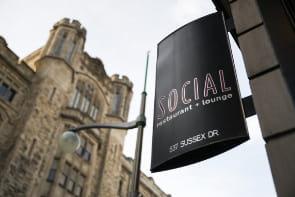 “The Clarendon Tavern is doing very well with a bit more of a 'slow and steady' increase in business as we get more people aware of it,” said Godsoe. “We're looking to expand the patio in the summertime, giving us 50 extra seats out there, which will be beautiful.” “Social is a juggernaut of a restaurant that does high volume,” said Godsoe. “But I have a fantastic team in there with my Chef de Cuisine, Peter. A lot of what I do there is more coaching, mentoring and maintaining the profitability of the business.” 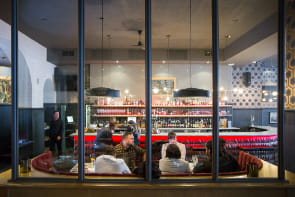 Godsoe notes that Social is nearly at its limits in regard to what’s still needed to make it a success.

“We’ll always have areas we can improve and grow,” said Godsoe. “Our team over there is doing a really good job of making sure we're always booked full of groups. Last year was one of our best years ever; the team did such a tremendous job and we'll continue to work on food, service and the wine list.” 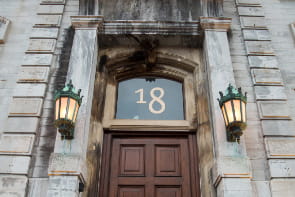 Near the end of the day, Chef Godsoe heads to Restaurant e18hteen for his most detailed workload, but also his greatest opportunity to have fun with food in the kitchen.

“I’ll head over to Restaurant e18hteen, get suited up and step onto the line to make sure service goes smoothly for the evening,” said Godsoe. “We'll be doing some renovations soon as it needs a bit of an update. We're also looking at expanding our steak offerings, tasting menus and getting a dry aging room for dry meats. This is the place that requires the most of my attention, being a Four Diamond restaurant, but while getting to be more hands-on as a chef. It's truly where I get to have the most fun, working in the kitchen with the food.” 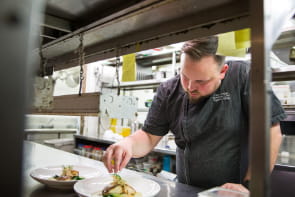 Despite the long hours and never-ending list of to-dos, Chef Godsoe does in fact have time to slow down and knows exactly how to use those periods accordingly. “Right now, it’s our slow season, so I’m using the time to build the teams I need to make sure we can be efficient when we pick up in April,” said Godsoe. “I rely on setting up my chefs at each of the restaurants so they can function without me. This frees me up to spend more time working on the business and less time working in the business.”

Bidding a short-term farewell to the wonderful chef-host, it was time for a visit to Bar Lupulus, home to Executive Chef Justin Champagne. Known for serving fine dining in a cozier, casual setting, Chef Champagne demonstrates a best-of-both-worlds concept in his dishes by pairing familiar, homey flavours with unfamiliar ones. His latest dish is a good example: A Cinnamon Chipotle Anolini Sole Stuffed with Seaweed and Koji Marinated Lamb Leg. 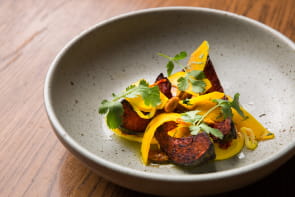 After that was a visit with Chef Jordan Holley, Executive Chef of Riviera Restaurant, who uses old-school techniques to create classic dishes with a Mediterranean influence. Chef Holley couldn’t wait to present his latest feature appetizer, the Tandoori Masala Roasted Squash. This dish is complete with yogurt, seeds, coriander and Club House® French Mediterranean Sea Salt. 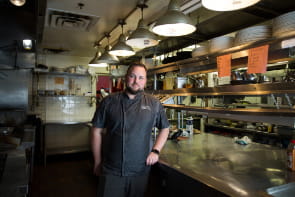 After Riviera came The Soca Kitchen, a Spanish-Latino specialty restaurant run by Chef Daniela Manrique to create her signature Soca Paella. This hot entrée is served with garlic aioli and a house-made sofrito enhanced by the pungent flavour of Club House® Turmeric. 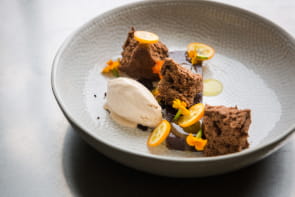 Our last spot on our culinary cruise of the capital was back to Chef Godsoe at Restaurant e18hteen and his new Club House®-inspired feature, a Chipotle Cinnamon Cremeux. This dessert is a delicious combination of butter, eggs, cream, melted chocolate and Club House® Chipotle Cinnamon.

After saying our goodbyes and au-revoirs to all, the catch-up with Ottawa’s culinary greats came to an end and we’re set to head to the shores of Lake Ontario, in Prince Edward County.

Continue to follow along with the Coast to Coast Tour as the crew heads to “the County” and beyond. Updates, recipes interviews and more are available via Instagram at @CH4Chefs / #CHCoast2Coast!