After covering Canada’s culinary landscape on both coasts and the Prairies, we turned our attention to Montreal’s culinary trailblazers.

Montreal is a top North American culinary destination with just about any flavour you’re craving. We got an up-close look (and taste) with Michele Forgione, Executive Chef of Montreal’s Impasto, Chez Tousignant, Pizzeria GEMA and Vesta. 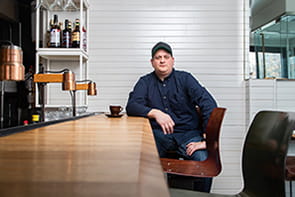 Having been raised in a kitchen-centric family, Chef Forgione has maintained his dedication to real, good food. Along with his business partner, Stefano Faita, he has also developed a retail line of pasta sauces and pizzas available in Canada and the US.

Chef Forgione was excited to take us to four legacy destinations in town and share what he’s learned from them all.

“This place is my go-to for breakfast. The sesame bagels are my favourite, expressed Chef Forgione.” Owner Roberto Moreno has been making bagels since the 1950s, and his signature Montreal sandwiches are now being delivered nationwide.

“The secret to success here is that we’re steeped in tradition,” explained Moreno. “The process behind the Montreal bagel hasn’t changed. Everything is hand-rolled, boiled in honey water and cooked in our wood-fired ovens.” 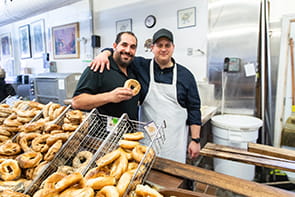 “This is the aroma of my morning,” Chef Forgione chimed in. “When you come around here, you smell the sesame toasting right away. It’s one of the things that makes Montreal what it is, and why we’re here today.”

#StViateurBagelFact: Their bagels are boiled for five minutes and dipped in sesame seeds on both sides before being cooked by fire on long, thin boards. 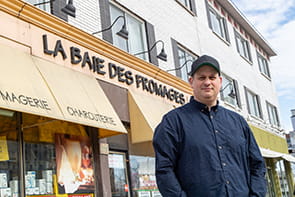 After their morning bagel, the crew hit up La Baia Dei Formaggi!

Since 1973, La Baia Dei Formaggi has been importing quality Italian cheese, olive oils, stewed tomatoes, aged balsamic vinegars and more. It’s been a Forgione favourite since his grandparents used to take him here as a kid.

“The assortment is insane,” he said. “It’s paradise for any chef.” 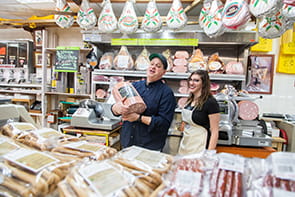 Back in the day, Forgione explained, not many places in Montreal would import big wheels of Parmigiano Reggiano. So, La Baia Dei Formaggi became the go-to place for chefs to pick up fresh, large grating wedges.

“They’re a great family, very visionary because they’ve always thought of bringing in quality,” said Forgione as he excitedly picked up a jar of his sauce. 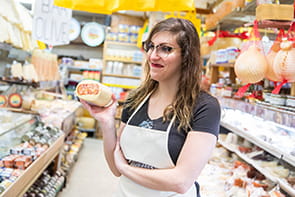 #LaBaiaDeiFormaggiFact: One of the top items bought by chefs at La Baia Dei Formaggi is the cacciospianata, a Sopressata Calabrese surrounded by provolone.

Up next on the tour: Quincaillerie Dante — a culinary-supply retailer run by Montreal’s “Mother Chef,” Elena Faita, since 1965. Chef Forgione said he feels like a kid in a candy store when he’s here. And it showed all over his face. 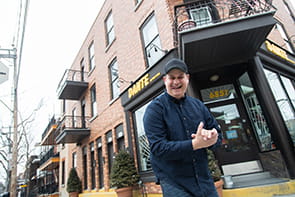 “I like to grind peppercorns with a mortar and pestle because other mixers make them too powdery. This gives me control,” beamed Forgione as he held up his favourite mortar.

#QuincaillerieDanteFact: The slogan for the shop is “C'e tutto Per tutti”, which means there’s everything for everyone.

Mama Faita said the hand grinder is her best seller. Doing meat this way is best, she continued, because it doesn’t heat up the meat so you can put your special spices in it. 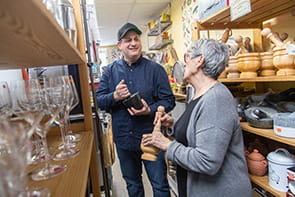 The group’s final stop was the incomparable Moishes Steakhouse.

Moishes was originally owned by Moishe Lighter and eventually handed down to his son, Lenny. Then, in 2018, Quebec’s Sportscene Group purchased the restaurant and the rights to their retail products. Lenny happily remained among the company’s management, with the promise that the experience wouldn’t change. And it hasn’t. 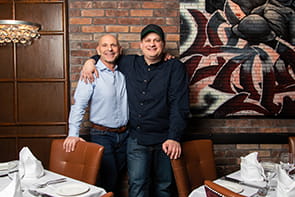 “The original owner’s name was Saffrin,” said Lenny. “My dad worked for him as a busboy and waiter. Saffrin was a gambler and my father won the restaurant in a card game from Saffrin in 1938, and that’s how it became Moishes.”

“Moishe became a mentor to me,” said Forgione who was once the Executive Chef here. “He’s the reason why I do what I do.” 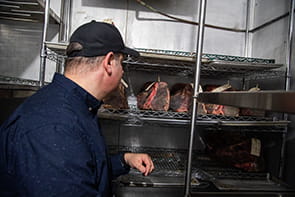 After Moishes, it was time to bid Chef Forgione adieu so that we could prepare for our evening to be spent with some of Montreal’s top chefs to collaborate on exciting new recipes. And we went into the evening inspired by what we had experienced, tasted and talked about all day.

Stay on top of Club House® for Chefs’ Coast to Coast Tour on Instagram @CH4Chefs / #CHCoast2Coast. And catch up on our previous stops in Edmonton, Winnipeg, British Columbia and Halifax.