Club House® for Chefs’ Coast to Coast Tour embarked on a food and flavour-inspired exploration of Canada’s east coast via beautiful Halifax, Nova Scotia. Not quite caught up yet? Catch the recap of the first three stops, Edmonton, here, Winnipeg, here and British Columbia here.

One of Canada’s not-so-hidden yet under-explored gems, Halifax, Nova Scotia is chock-full of fresh, ever-changing flavours due to its extreme seasonality plus close proximity to the shores of the Atlantic Ocean. With more than 18 vineyards and wineries, plus auto+ restaurants, this Nova Scotian capital is a wine and dine destination that had to be uncovered. Our honourary tour guide on this fresh air adventure? Chives Canadian Bistro and 2 Doors Down Executive Chef Craig Flinn! 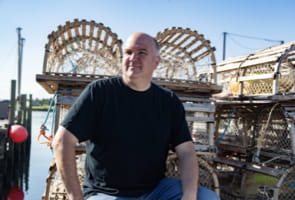 Having spent 18 years and counting behind the line of Chives Canadian Bistro, plus his opening of 2 Doors Down, Chef Craig has built his legacy around the philosophy of “extraordinary fine dining;” approachable food with an elevated, special taste, no matter what’s cooking. He’s also known for his cookbooks Fresh & Frugal, Fresh Canadian Bistro, Fresh & Local as well as his appearances on top culinary programs like: Chef at Large, Bizarre Food and You Gotta Eat Here.

With an integrated focus on using seasonal Halifax ingredients, we couldn’t wait for Chef Craig to show us the ropes across his local neighbourhood.

First up on his visit list was AshMeg Seafoods, a family-operated fresh and frozen provider of quality, hand-cut seafood products for restaurants. To make it even easier for busy local chefs to get the freshest orders fast, AshMeg Seafoods even takes orders by text! 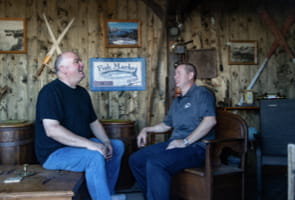 “We have quite a bit here; fresh halibut, swordfish, tuna, salmon, mussels,” AshMeg Seafoods’ Larry Powell explained, “our fresh haddock is our main seller every day.”

“You’re doing like 80% of the work for me when you bring in the freshest possible ingredients,” Chef Craig added. “All I’ve got to do is cook it, put some salt on it and everyone goes, ‘oh, you’re an amazing chef.’ Really all I’m doing is not over-cooking this halibut that you caught thanks to your team,” Chef Craig added.

Following a quick huddle on the water, Larry took the group inside for a show-and-tell of some of their latest catches, as well as an opportunity to touch and feel the different marine creatures; no pinching.

#AshMegSeafoodsFact: The price per pound doesn’t vary between male and female lobsters.

“If the temperature’s right, the lobster can live for up two to three days with no trouble. When you ship them, you’ve got to keep a constant temperature around 5-6°, 4° works best for them,” Larry added. 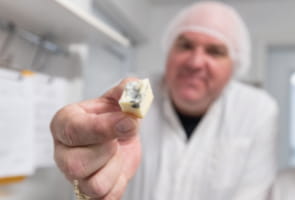 Next, it was time to head from the blue waters to a blue harbour – Blue Harbour Cheese, that is! Run by cheesemaker Lyndell Findlay, Blue Harbour Cheese gets Halifax to “Embrace the Blue” as a top producer and restaurant supplier of artisanal, handmade cheeses.

Inside her small factory, Lyndell showed Chef Craig and the team how her operation only requires three main areas: the preparation room, the aging room and the cheese making room.

“What you see is what you get,” she smiled, ready to show everyone the production of one of the most popular cheese products, curd!

“We get to taste at the end? That’s the important thing,” Chef Craig asked with a laugh.

“I think so, I can probably arrange that,” responded Lyndell.

“When you cut the curd, you create surface tension. The more you stir, the more firm the surface gets,” said Findlay, “this process takes an hour or so and firms up the curd so it doesn’t break apart.”

And yes, Chef Craig got to taste the fresh curd. 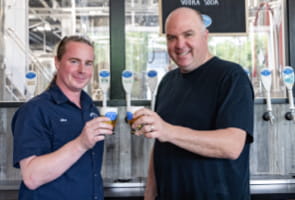 A perfect pairing with cheeses of many kinds, Chef Craig could think of no better destination for our next stop than Dartmouth’s Nine Locks Brewing Company. Inspired by a micropub concept built under his Halifax pub, Your Father’s Moustache, Shaun O’Hearn first discussed the idea of the microbrewery with next door neighbor and cousin Danny O’Hearn in auto4, and they’ve been growing their foodservice relationships in that new way ever since.

“What are a few things a restaurateur should look for when buying beer?”

“Quality is the biggest thing. You’ve got to find a brewery that’s going to supply the quality you want to bring to your customers. A lot of the beer market is driven by a bit of a race to the bottom pricing and that’s not necessarily going to get you ahead,” answered Jacob Saunders, Nine Locks Brewing Company’s Head Brewer.

“You’ve also got to find a beer that’ll support your food the way you want it to. Everything tastes better when it’s next to something delicious.”

#NineLocksBrewingFact: The difference between an ale and a lager is the kind of yeast. An ale’s yeast is saccharomyces cerevisiae, which is the same yeast you’d make bread from.

After the last few sips, it was time to say goodbye and head to the last guided tour stop of the day, Noggins Farm. 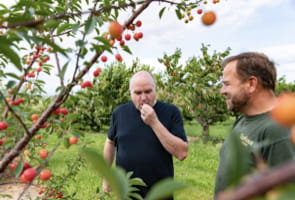 “I always love coming down to the valley and right to Noggins Farm,” Chef Craig explained. “There’s something special about the experience, being able to communicate and see what’s growing every day. Every time I come down here, there’s a new array of vegetables and fruit available. It’s a very special feeling, one that inspires me to cook. I source my menus based on what I find at this farm all the time.”

Family owned and operated since 1760, Noggins is a top supplier to restaurants of fresh, raw produce while also serving its foodservice community at the local famer’s markets.

During a picking of cherries together with Josh Oulton, the farmer at Noggins and Taproot Farms, Chef Craig discussed the important communication between farmer and restaurateur, and how best to approach for needs-based produce.

“If you were going to say one bit of advice to a chef or restaurateur about how to get your great local produce on their menus, how would you go about doing that?” he asked.

“I would say it starts early so you want good communication and to keep the lines of communication open so that we can just work as a team,” answered Oulton.

Now full of beer and fruit, the Club House® for Chefs team bid a temporary adieu to Chef Craig in anticipation of the additional restaurant visits to be taken upon during the Halifax expedition. There, they would collaborate with Halifax chefs, Chef Craig included, to create Club House® for Chefs-made, east coast-inspired dishes to share with restaurateurs in Nova Scotia and beyond.

Be sure to keep up with Club House® for Chefs on their Coast to Coast Tour via Instagram @CH4Chefs / #CHCoast2Coast.