Cooking in the Skies of the Stampede City 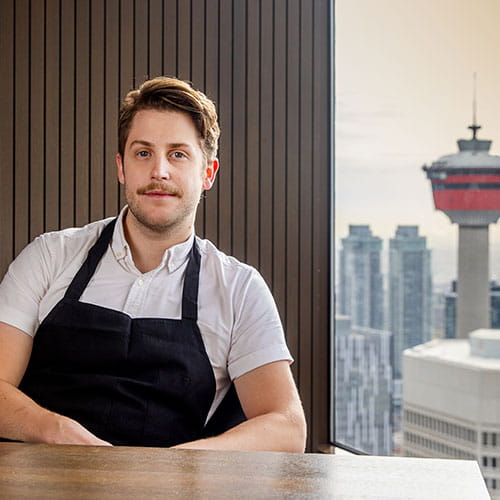 Kicking off his culinary career as an Earl’s line cook in 2009, Chef Garrett Bruce Martin cooked from anywhere he needed to be to become the best version of himself. From the fish station of Bouchon Bistro (Yountville, California) to the French dining of Muse Restaurant & Lounge (Calgary, Alberta) to the Michelin-starred tasting menus of Daniel Berlin Krog (Skane County, Sweden), no cuisine was too big a challenge.

With such dish diversity under his repertoire, Chef Martin now takes on multiple concepts with consistency and creativity under the restaurant umbrella of Calgary’s Concorde Culinary Group where he serves as Culinary Director.

We headed 40 floors up into Major Tom, one of his main stations, to uncover his approaches to menus, staffing, making top restaurant lists and much more.

Concorde Group has a very large portfolio, and many menus to manage. How do you and your culinary team approach development and diversity across all properties?

I am involved a bit with almost every concept in the company but not on a day-to-day basis. Daily, there are four concepts I'm involved with: here (Major Tom), Model Milk, Pigeonhole and Sky 360. We have a couple more coming down the pipeline I'll be a part of.

As far as places like Bridgette and Lulu, I had some heavier involvement with them in the past and now I don't work with them as often. I still pop in, talk to the chefs and do the occasional menu tasting. We have a group of people who are in similar positions as I am that look over specific concepts, so while I may have a hand in a national thing here or a double zero pizza thing there, we have chefs who are really focused on that. They do a great job so I don't really get too involved unless they need some support in a certain area.

With any larger group, great people come and go. How do you keep up the consistency, and when do you know when to move someone internally?

For us, it's all about promoting from within. We certainly hire from outside occasionally but we try to double down on catching the people with the best attitude that really want to grow, see the opportunities within the company and focus on them. As far as diversity goes, I think that while there are a million different concepts in the world and however many in the company, our motto is always just going to be that we want to have perfect food in any location.

Regardless of the food or service style, we want to deliver the absolute best that we can. So, we try to get people who are really passionate about the place that they're in. We don't want to have somebody who says, "I'm in a National and it's a beer hall so I don't need to try as hard." We take just as much pride in the food there as we do here.

What does winning a title like “Canada’s Best New Restaurant” do for business? What can be some of the pros and cons of this kind of publicity?

From a financial standpoint, it's great; the place blows up, which is awesome. Going through that experience at Pigeonhole, the exposure is great and everything that comes with it. There are all these people coming through the door and patting you on the back. But, at the end of the day, those people that are about the hype restaurants will kind of slowly die down and you'll settle into your clientele.

The big thing for us is just finding the right clientele and the people who want to come back once or twice a week. We don't really want to have any special occasion restaurants in the company, we want to have places people want to eat at multiple times. To cast a wider net to have more people come in and say, "This is my new spot," that's really great for us and what's more important than just the exposure. That stuff is great but it dies down.

All of the places that have won these Best New Restaurants and Canada's Best Restaurant experience a wave and it crashes pretty quickly. For us, it's just about maintaining that consistency with our guests and having them come back over and over again.

One of your establishments, Major Tom, is 40 floors up. Are there unique challenges that come with having a restaurant in the sky?

A lot of the horror stories that I've heard from people who worked at other restaurants similar to this are like delivery drivers not being able to make it up, the orders have to be downstairs or all of the storage is in the loading dock so they're making constant runs up and down. We're extremely fortunate that this restaurant was built with a lot of those things in mind and runs very efficiently.

One of the biggest issues that we have is that every guest wants a table by the window and only ten to fifteen percent of the tables are by the windows. When you have a place like this with a great view and a slightly higher price point, there are a lot of people who come in to celebrate anniversaries, birthdays and want that seat by the window. Unfortunately, it's just the reality of our situation that there are so many and it's a first-come, first-served thing.

I do believe that every table in here is still a beautiful table but some people want that spot with the huge view of downtown and there are only so many to go around.

What has been the hero dish that you know will resonate with guests and is easy to make, with your best margins?

I find myself to be pretty restless with food and try not to replicate things. I want to put out something new all the time and don't like going back to things we've done before. Sometimes you're in a pinch and have to do a menu change in a week and might do something we did last fall or something but we try to avoid that.

The two things that took us the longest to develop on this menu were the burger and the cheese toast, which are two things that home cooks can make in their sleep. We couldn't figure out how we wanted to do them. Meanwhile, the dishes that seem to be the most complicated, or have the most outlandish flavour combinations, seem to come together way quicker. It's funny when things work like that.

As far as myself, there's one dish that I've done at a few events that I keep in my back pocket: Dungeness crab with burrata cheese. It's a fun combination because burrata cheese is not super funky cheese, it's more like a creamy milkiness. I then finish it with [sounds like nom-jim] butter so it's like a sauce made from lime leaf, fish sauce and the butter folded through it. It's very rich but has a funky sourness.

Speaking of inspiration, how did you find it for your dish today while using Cattlemen's Chipotle BBQ Sauce? Anything that would be helpful for other chefs or operators to know about it?

I didn't just want to do BBQ ribs or something like that, that'd be the delicious easy choice, but to do something a little more creative and see different sides of the sauce is something worthwhile. I started thinking about BBQ dishes and how when I was in Toronto a few years back, I had a really awesome BBQ crab. It was done Thai-style grilled with a black pepper sauce and it was delicious. It got me thinking about BBQ crab and how I could do that.

Dungeness crab is mild and sweet so it was important for me to not overwhelm that. By making a crab stock and turn the BBQ sauce into a broth with the crab flavour, it was a good way to get the chipotle flavour, the smokiness, the sweetness and the tanginess while not necessarily being that rich, gloopy sauce people love on ribs. Ribs can stand up to that whereas something like a chilled crab probably couldn't, but you still get all of those flavours.

This is something that I don't think I would have said at the start because none of us knew what was going to happen, but now that we've started to see the patterns of all this kind of thing, we've really put a lot of thought into always thinking two steps ahead. As soon as we see the cases start to climb, we're not going to switch to takeout immediately but if the announcement comes out, are we ready? What are we going to do with the staff to make sure we don't lose them? What are our menus going to look like here? Do we have any holidays coming up that we can cater to?

No one was prepared last March when this whole thing happened and there were a lot of learning curves. But, this has proven to us that we need to be able to turn on a dime a lot faster than we did last year. It took us almost two months to go into takeout and now if they were to announce this tomorrow, we would know what our plan is, what the menus are and which staff are going where.

It's pushed us into these contingency plans I never thought we would need but it has taught us that we need to expect the worst a little bit more often and to plan for it. For restaurants to not have a plan at this point is shooting yourself in the foot.

Which dishes will travel? Do you have takeout boxes sorted? Think two steps ahead, keep close eyes on everything and don't get caught off-guard. 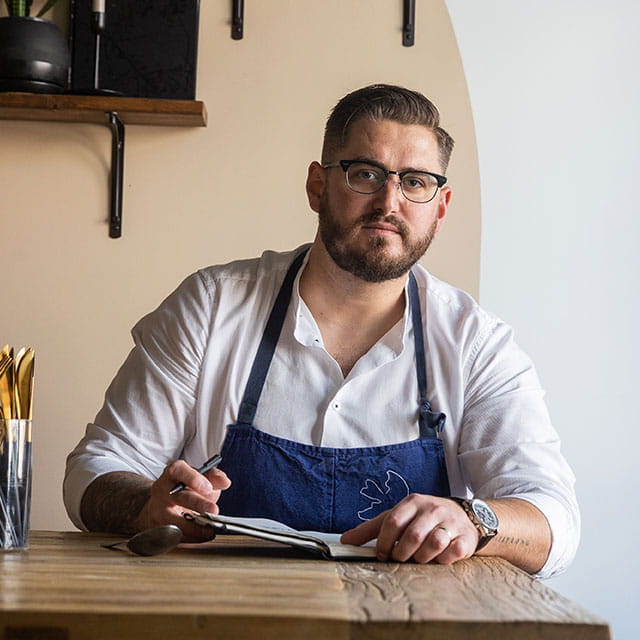 In the middle of a pandemic, Chef Harper found himself working as the Culinary Director for Vancouver’s corporate-facing Cocktails and Canapes, a top catering and events company. 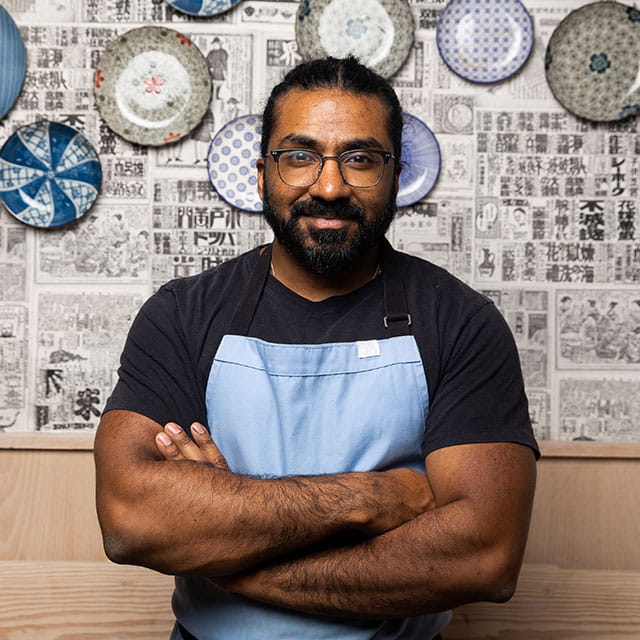 A red-seal certified graduate of Vancouver Community College, Chef Alvin Pillay continued to grow his culinary skills and résumé in his own BC community.