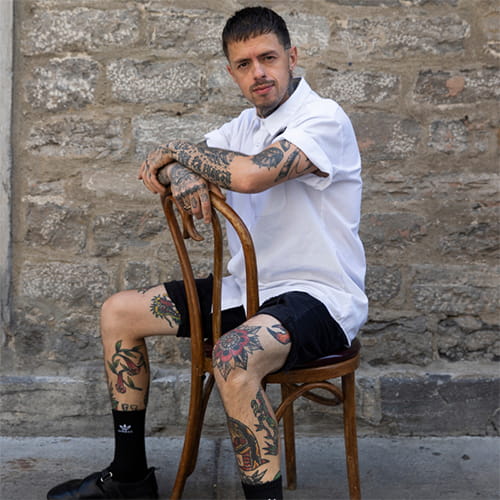 After growing up in a Chilean household, and becoming the home cook by age 16, Nicolas Salinas began attending cooking classes to act on his passion for the culinary arts.

After working behind the line at establishments including Primi Piatti (Saint-Lambert, QC) and L’Incrédule (Longueuil, QC), Salinas cooked at and co-owned Les Nomades before moving on to Bocata (Montreal, QC).

When the 2020 pandemic hit Montreal, causing many establishments to close, Salinas went from the Bocata kitchen to selling empanadas from home to launching Super Loco, a back alley pop-up to keep his team, and Chilean flavour offerings, afloat.

We stopped by his current station of Barroco (Montreal, QC) to find out more about Salinas’s influences, recent shifts and how he’d like to help other chefs moving forward.

Montreal is known for European-style restaurants. Is there a common thread to this theme, and how do you balance influences and flavours?

I feel like Montreal is not only about European restaurants, it's about every part of the world all mixed together, but the European part is where a lot of techniques come in. Personally, I'm from South America and put my South American flavour twists in everything I try to do.

I've done many different types of cuisines including Indian, Asian, French, and Montreal is an open-minded platform for any kind of cuisine.

Where do your influences come from?

How I came to this profession is by enjoying food from when I was a kid. Coming from Chile, I had my parents always cooking at home. I'd love the smell of the food and would always go help them. I never thought of being a cook; I originally wanted to be a lawyer but I wasn't the best at school. I was that bad boy kind of guy so I wanted to do something myself. My parents are very hardworking people and I had that in me so I said let's go with cooking because I love it so much, I have a passion for it.

When I was 16 years old and living with my mom and sister, we had very little money so I would make supper with cans and whatever was in the pantry. I can make food out of nothing so why not go into that? At 18, I went to cooking classes. I can also teach myself off YouTube, many books, the internet and inspiration from others. That's how I create my mark.

What distinguishes me from other chefs is that I have a very high flavour profile. It's not only about techniques, it has to taste good, the ingredients together have to work and they have to have balance — I'm good at that.

Which dishes on the menu do you find are the best introductions for locals who perhaps haven’t experienced the restaurant’s cuisine before?

At Barocco, they're very known for their Paella, which is a seafood risotto cooked in saffron, tomato, calamari, chorizo. It's very famous here. They also do an amazing braised beef.

When you go to a restaurant in Montreal overall, it's good to know what their specialty is and to try that.

Why are specials important to have at restaurants?

It's not that they're important. When you make a special, you go out of your conducting line, which is a line to follow in a restaurant for your food costs, labour and team direction. When you come out with a special, you've created something different, something new. It's good for the team to see something new and it's good for the customer who comes all the time because they can try something different. It also expands our knowledge and lets us use what's in season.

In Montreal, we're in season for 4-5 months and then it's very hard. In winter, you have to work with products from the summer that you canned, fermented or marinaded.

How has business been during the pandemic?

It has been very hard for me to stay focused and motivated because a lot of people I know have changed careers. A lot of chefs are now working in construction or as electricians. It's difficult as a chef to always have to maintain your team's motivation.

After serving empanadas out of my house, I opened the Super Loco, serving Spanish-Chilean empanadas with sandwiches. I kept two of my guys while being able to place my dishwasher with another restaurant in the Barocco Group.

Why did you eventually choose to shut down Super Loco?

We were selling two hundred to three hundred bucks a day but that doesn't pay rent, staff and food. At a certain point, I had to play with my food offerings, recipes and look at where I could save money. I squeezed the towel to the max and as good as it was, being in a back alley without heavy foot traffic was hard, especially with all of the time and energy that was going into it.

I was making the dough from scratch, working from a factory, while being a single father to my son. I was always trying to encourage my team and giving them more hours, and taking less for myself, so they could have full pay. I was barely making money myself, headed down the drain. I couldn't keep going like that and had to do something different so I stopped the Super Loco.

I then came here to Barocco because they needed help. One of my staff from Super Loco came here as well while the other went to Foiegwa so we still saved our staff somehow.

If I find a local on the street where there's traffic, I'll consider a Super Loco comeback.

In today’s recipes, you’ve favoured Keen’s® Dry Mustard. What do you enjoy about using it in your dishes?

Keen's is an under-served product that chefs and cooks don't commonly use as a main ingredient because it's very powerful and has a bitterness to it. You have to balance it with a lot of other ingredients to make it something good.

What I like about it is that the flavour profile helps a lot with other spices like paprika, cumin and pepper. Altogether, it makes a nice balance. I put it in yogurt, marinade, naan bread, butter, everything. You won't get the full mustard taste but you get that little hint.

Any message you’d like to pass on to your fellow restaurateurs?

Never stop doing what you love doing. It's hard and sometimes doesn't pay off well but if you have passion and love what you're doing, I say keep going. Don't discourage yourself.

As a chef in Montreal, I'd love to be able to work with other chefs more in a way to help each other out. At a certain point, I want to have meetings where chefs from different restaurants can meet up, speak, express their feelings and what they're going through as a kind of therapy. We went through something very, very hard for us and that has resulted in discouragement, bad habits, quitting, etc.

Please keep going, follow your dreams and try to contact other chefs. We can develop friendships, contacts and make Montreal big again. This is a big city for food and we need to keep on that path.